In the past few days we have been continuously bringing you updates about how all the automobile manufacturers are going gaga over the two wheeler segment. In such times, how can the old pro Hero remain lagging? After its split from its Japanese partner Honda, the Indian two wheeler maker has a lot to prove. In the ongoing Indian Auto Expo 2014 the company has come up with a lot of future ready preparations. The best part of Hero’s range this time is that it has come out first time with completely self made range ever since its divorce with Honda. Hence, all eyes will be evaluating the technology being used under the shining steel. 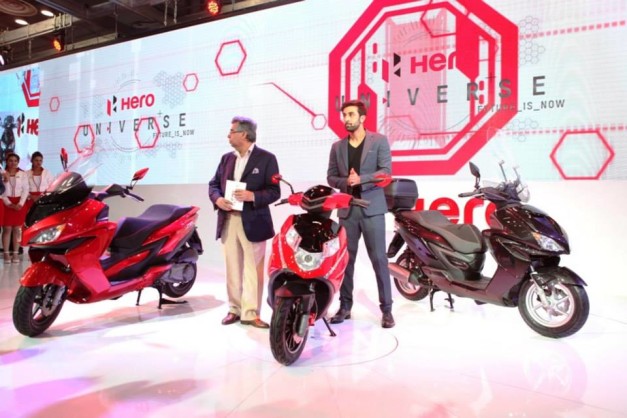 To steal the limelight at the much talked about 2014 Delhi Auto Expo, Hero MotoCorp has come out with a wide number of vehicles and concepts. Amongst the automatic scooters that the company brought on the dais of Auto Expo were Hero Dash, Zir and Dare. However, the showstopper for Hero was the classic Hero Honda Splendor which appeared in a touched up and glam pack new incarnation. This probably indicates the reintroduction of Splendour in the Indian two wheeler market. The brand has been out of buzz corridors since past sometime.

The Auto Expo is not the only place where the India born manufacturer is showing off its technological prowess. Just prior to the event, the company had introduced unveiled five new two wheelers including a diesel concept scooter. The segment has received a lot of attention from other players like Mahindra & Mahindra and Yamaha.  Just before this automobile extravaganza, there were some news of details and sketches of Hero’s 600cc superbike being leaked. In all in all, it seems that the company is getting set to ride the big stage even without its long term partner.