Ford India is all-set to launch their new Figo facelift just ahead of the festive season, the company has begun shipping the same to its dealers across the country. The Figo hatchback is the most important car for Ford India. Since its launch, Figo went on to become its highest selling model and a bread-winner for Ford in India.

The Figo hatch is well noticed by car buyers in India as it boasts enhanced interior space and priced below the Maruti Swift, VW Polo or the Hyundai i20. Ford has been seen testing the new Figo around various cities in India and is expected to launch their new car this-month itself. Being launched just in time for the Indian festive season of Dusshera-Diwali, Ford expects to generate even more sales numbers with their new small car.

Coming back to the new Figo facelift, the changes in the exterior include a hexagonal front grille and air dam, which takes cues from Ford’s latest design language. The front of the car will be refurbished a bit and the headlamp will have a new design. The indicators will be repositioned as well. The headlamps being redesigned would a good thing as the current look isn’t very impressive. At the rear, the tail lamps see a mild refresh in the form of the indicators being repositioned to the bottom of the tail lamp cluster.

The alloy wheels also feature a new design. The interiors of the car get a new twin tone color on the dashboard while the seat fabric also features a new color. The audio controls will be redesigned and will be relocated just besides the steering wheel. Technically, the new Ford Figo would not be seeing any kind of change in the engine department. The same 1.2-litre of Duratec petrol engine and 1.4-litre of Duratorq diesel engine will be present.

So far Ford India hasn’t officially announced the launch date of the new Ford Figo, but the launch is expected to happen within this-month. 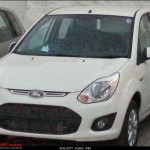 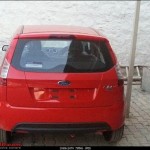 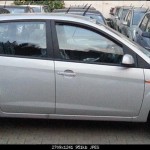 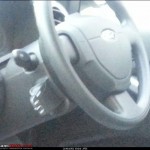 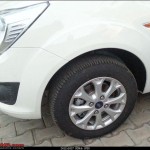 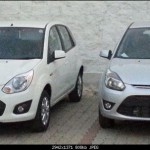