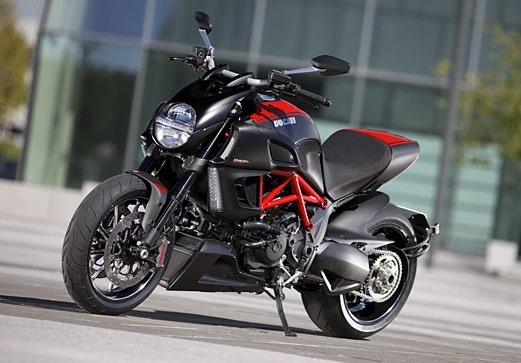 Ducati is planning to launch two new models 848 Evo and 1198 SP in India somewhere in this year. Mirko Bordiga, Ducati CEO, Asia Pacific inaugurated the company’s third dealership outlet in the country in Ahmedabad is owned by the Cama Motors Pvt Ltd. Bordiga said that Diavel model would be available in the European and American markets by January or February 2011 and the same model would be launched in India by April next year, depending upon the time it takes to get the necessary clearances from customs and complete other formalities.

Ducati Diavel looks quite different from other Ducatis. Large and bulbous proportions are seen everywhere in a rather Devilish looking design we must say. No prizes for guessing what Diavel stands for. As far as technical specifications go, all we know is that the Ducati Testastretta 11 engine would be powering the Diavel. BHP and performance figures are likely to be finalised closer to the launch. A host of latest technology would be seen on this new Ducati ranging from the ride-by-wire, traction control to ABS – according to rumors, let us clarify!

Bordiga added that the 1200 CC Diavel would be available in two variants, the base and Carbon S versions in India. Ducati will open dealership outlets along with service stations in 10 major cities across the country in 2011 as part of its expansion plans.

Ducati India CEO Ashish Chordia said that they were targeting to sell over 300 units of the racing bikes in the next 12-months period. Since its launch in 2009, the company has sold over 100 units through its two dealers in Gurgaon and Mumbai.

Chordia expects that Ducati will sell over 300 units in next one year with sale of 40-60 unit anticipated from Gujarat itself. The reason behind the company choosing Ahmadabad for its third dealership is that the company foresees huge potential motorcycle market in the state. He further said that the company was also planning to begin the Indian chapter for Ducati Riding Experience (DRE).