One look at the all new Santa Fe SUV and it is difficult to digest that this is a Hyundai. While I am not saying that Hyundai makes bad looking cars, but looking at its current Indian portfolio only the i20 makes a pretty case for itself. The Santa Fe then is sure to add some more pizzazz into the lineup of India’s second most successful car manufacturer. While the Korean giant has had tremendous success with small cars, its SUVs namely the Terracan and the Tucson which were pretty good vehicles in their own might, never really caught the Indian buyer’s fancy. The Santa Fe then is all set to change that. 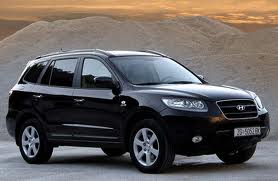 Christened after the city of Santa Fe in New Mexico, Hyundai’s midsize SUV made its debut in the year 2001 as Hyundai’s first SUV. Based on the Sonata’s platform, the first generation car looked pretty much like our current Tucson but with an extended wheelbase. But after nine years of evolution it’s a whole new breed altogether. The SUV market in India is a pretty buzzing segment. With a horde of players already fighting for their piece of the pie, it’s a fierce market out there. So how does Hyundai plan to stand out?

Coming back to what I mentioned in the beginning, the Santa Fe looks simply striking. While it’s definitely not as radical as the recently unveiled Hyundai ix35, the Santa Fe’s beauty lies in its subtlety. The current design is anything but quirky with Hyundai adapting hints of the fluidic sculpture design language seen on the recently unveiled ix35 and Sonata. The lines are clean and uniform with none of the fussy elements from their previous designs. Compared to last year’s model, the 2010 car features a whole host of changes creating a more stylish, dynamic and taut stance.

Standard roof rack side rails also help in defining its clean side profile, while adding SUV functionality. As far as presence is concerned, it might not be as intimidating as a Ford Endeavour which is the biggest of the bunch but it is definitely a size up on the likes of the Honda CR-V, Mitsubishi Outlander and Hyundai’s own Tucson.

The interiors follow the pleasant exteriors and aim to offer acres of space and comfort. The fascia is dominated by a high-resolution touch-screen with which Hyundai might offer a navigation system as an option. There is also the dual-zone climate control for the driver and front-seat passenger while rear passengers get cooled through the B-pillar mounted adjustable vents. Highlighting Hyundai’s attention to detail is the blue backlighting for interior gauges, switches and buttons which give the interiors an uber-cool environment.