Maruti Suzuki India has bagged its single largest manufacturing order for its popular SUV – the Gypsy from the Indian Army. The price for the Gypsy ranges between Rs 5.42-5.96 lakh in Indian market, the army gets vehicles at a different rate. The order was finalized through a central government tender & the amount paid will not be disclosed. But calculating basis on the above mentioned price, the order should be in the territory of Rs 216 to 238 crores. 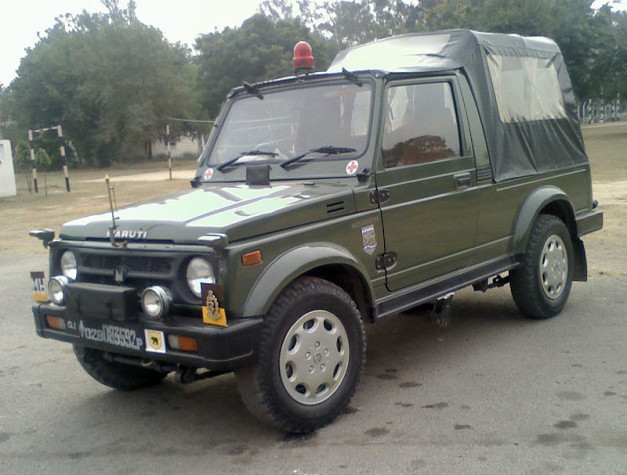 The company delivered around 1,500 Gypsys to the army in its first year 1991, and with the latest order the number now stands at 31,000 units. Maruti Suzuki has produced around 1.4 lakh units of the Gypsy for India. 22% of the production has reportedly been for the armed forces. However, Maruti has already dispatched 2100 units over the last two months, while the rest of the vehicles will be delivered in the next 4-5 months.

The army has been a major consumer for the Gypsy, but the SUV is also available for civilians to purchase.

Refresher: Maruti Suzuki Gypsy is powered by a four-cylinder 1.3-litre petrol engine and delivers around 12 kmpl. This SOHC engine pumps out a power output of 80 bhp at 6000 rpm. The torque output of this 16 valves engine is of 103 Nm which arrives at 4500 rpm. This engine is mated with a 5-speed manual gearbox which supplies power to its front wheels and comes with optional four wheel drive system. Apart from its strong body panels and powerful headlights and fog lamps which provide you clear visibility at night, there are no premium safety features in this car.

Also see – Maruti Gypsy to get a major upgrade soon, adds diesel to the range