The Nano was supposed to be the cheapest production car in the world back when it was launched, but along with being cheap in price, it turned out to be cheap in quality too, thanks to the cost cutting measures implemented by Tata. Not just that, the Nano also gave people a cheap impression, and because of the common Indian logic that the Nano was a cheap car, it’s sales figures took a serious dent, and the competition too wasn’t helping things. A combination of all these factors meant, the Nano did not meet company sales expectations and we can still see Tata Motor’s stockyards filled with unsold Nano’s! 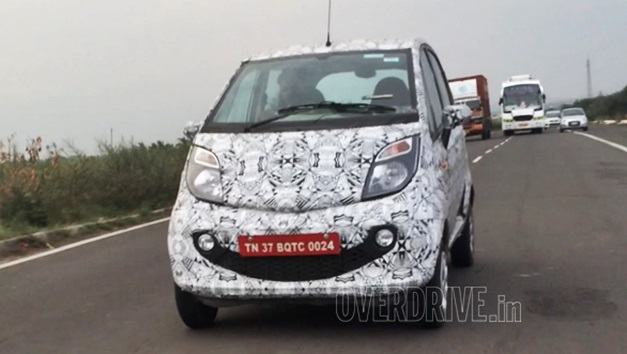 Tata Motors had to find a solution for this, and soon! As they had already invested a lot in the Nano project and it was too late to back out. The solution they found was to launch many new updates and more variants of the Nano.  Two such variants were displayed at the Indian Auto Expo Held in Delhi earlier this-year. Named the Nano Twist F-tronic and the Nano Twist active, these two new variants brought about many changes to the Nano palette, including some major changes like a new diesel engine and also an AMT gearbox, and some subtle ones like redesigned interiors and a few exterior changes.

Of these two, the Nano Twist Active has already been launched, a couple of weeks ago, with new additions like power steering and redesigned interiors, combined with new decals on the exterior of the car and now, yet another supposed variant of the Nano has been spotted while undergoing camouflaged testing. 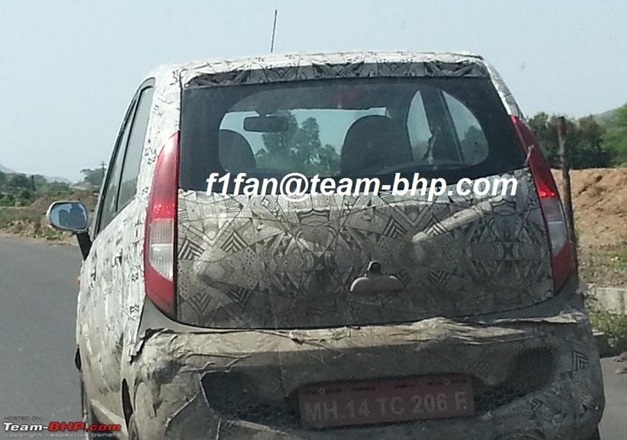 The test mule which was spotted, had many noticeable changes when compared to the erstwhile Nano. The major aesthetic change noticed was, the new redesigned front and rear bumpers, which now feature a meshed grille in the shape of a big smile, and at the ends of the smile, they house the fog lamps. The headlamps too get a smoked effect, and the whole front fascia of the car is now a lot more pleasant to look at. Another convenience feature which has now been implemented is, a rear opening Hatch, which was unavailable with the Nano till now.

The test mule is reported to the AMT version of the Nano. The AMT(Automatic Manual Transmission) technology appears to have taken the country by storm after it made its debut in the Maruti Suzuki Celerio, and the AMT variant of the Celerio contributed to a majority of the overall sales. Since then, almost all the manufacturers in the country with cars within the Rs. 10 lakh bracket, have been scrambling to develop an AMT gearbox for their own cars and Tata was one of them. As it turns out, the Nano will be the first Tata to receive the AMT treatment, and the boffins at Tata are expecting this to give the sales of the Nano, a shot in the hand.

Well, it all depends on how they price the Nano.