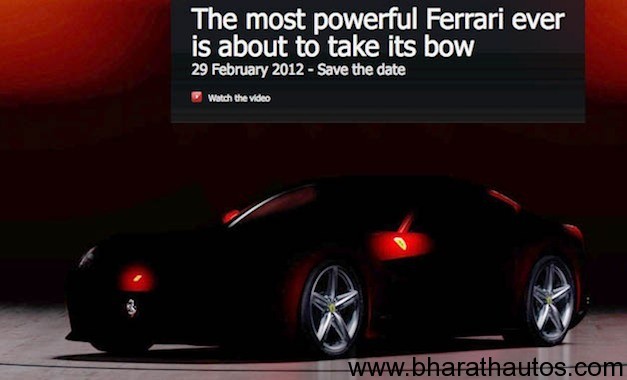 Hoping to clear up some rumors and speculations, Ferrari today confirmed that it will indeed be debuting a V12 road going model on Feb. 29 – just days before the 2012 Geneva Motor Show. Known as ‘the most powerful Ferrari ever,’ the model will be a replacement for the Ferrari 599 and is likely to be called the F620 GT.

It is said that the F620 GT’s V12 engine (front mounted) will produce 720PS of power and will be mated to a 7-speed dual clutch transmission. Power will be sent to the rear wheels via an electronically locking rear differential.

It is also rumoured that Ferrari will make use of aluminium instead of carbon-fibre for the construction of the chassis while design cues of the new car will be taken from stable mates – FF and 458 Italia.

While we wait patiently to see the car at the 2012 Geneva Motor Show, have a look at the new teaser released by Ferrari after the jump.