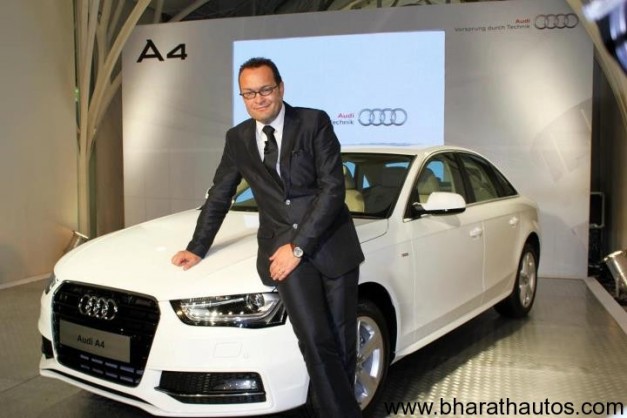 The German luxury car manufacturer, Audi has launched the updated A4 saloon in the Indian market today at a starting price of Rs. 27.33 lakhs (ex-showroom, Maharashtra). The new Audi A4 offers considerable advantages over its predecessor and combines powerfully dynamic design with outstanding handling characteristics. This sporty and stylish new model is now available at Audi dealerships across the country.

The refreshed A4 is a key rival to the recently revealed, sixth-generation BMW 3-series and the recently-updated Mercedes-Benz C-class. The reworked A4 gains a host of detailed styling and changes to its interior – all of which are aimed at setting it apart from the current model. Among the visual tweaks is a subtly altered front-end exterior styling. It features more curvaceous headlamp assemblies with reworked LED running lamps now appearing as a continuous band.

Other changes include greater contouring to the bonnet, a new six-corner single-frame grille – which is painted grey on four-cylinder models and black on six-cylinders – as well as a re-profiled bumper carrying trapezoidal-shaped fog lamps. At the rear, there are new tail lamps with altered LED graphics and a new bumper.

Inside, Audi has attempted to provide the face-lifted A4 with higher perceived quality and greater ease of use. This is achieved through a new steering wheel design, higher quality dashboard and centre console trim applications, detailed design changes to the switchgear (which Autocar India has often been critical of) and alterations to the optional MMI (multi-media interface). 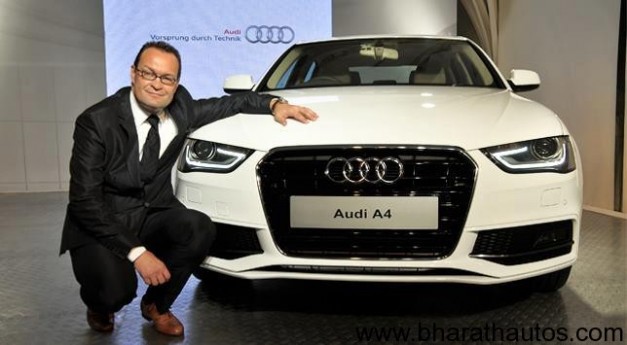 Under the hood, the car is offered with three engine options, a 1.8 TFSI petrol, 2.0TDI Diesel and 3.0TDI diesel with Quattro all-wheel drive;

“The new Audi A4 with its progressive design, efficient driving dynamics and class defining interiors will take the driving experience to a new paradigm for all our customers. The young and sleek looks will appeal to the younger generation who have arrived in life and are looking to affirm their status and positions among their peers. The engines with their superior technology will give better fuel efficiencies while the new and improved lines and interiors will certainly turn heads and add to the comfort and luxury that one expects from Audi. The outstanding sales performance in the first quarter of 2012 of its predecessor encouraged us to pre-pone the launch of the new Audi A4”, said Mr. Michael Perschke, Head, Audi India

Audi continues to be the fastest growing luxury car brand in India. The brand with the four rings continues to be the market leader in the sports car segment with Audi R8, Audi RS5 and now Audi TT and in the luxury SUV segment in India with Audi Q5 and Audi Q7. The launch of the new Audi A4 will strengthen Audi’s A range of limousines and will further consolidate Audi’s leadership position in the segment. It is now concentrating on expanding its sales and service network, especially in smaller towns.