Basically miniaturized versions of the Audi A7 and S7 Sportback, the A5 and S5 finally bring Audi to the fight against the BMW 4-Series Gran Coupe, Coupe and Convertible in global markets. Exterior-wise, the A5 sedan and the A5 Cabriolet both look similar and feature a chiselled bonnet with the signature hexagonal grille at the front. The S5 gets a subtle bodykit with S5 badges on the front fenders, silver ORVM housings and quad-exhaust tips.

The interiors of the Audi A5 range include a new sporty, 3-spoke steering wheel with shift paddles is available on all models, black wood-trim in the cabin (faux aluminium in the S5), MMI Touch infotainment system, and the Audi Virtual Cockpit which uses a 12.3-inch TFT monitor instead of the usual analogue dials. Features like Audi Smartphone Interface, Bang & Olufsen audio system and ambient lighting package are optional.

The new Audi A5 engine choices range between a 2.0-litre, 4-cylinder diesel engine which produces out 187 BHP and 400 Nm of torque and is paired with a 7-speed dual-clutch transmission for the A5 Sportback and A5 Cabriolet. The S5 on the other hand gets a 3.0-litre, turbocharged V6 petrol engine that develops 349 BHP and 500 Nm of torque paired to an 8-speed automatic gearbox. The A5 Cabriolet and S5 get Quattro all-wheel drive with a self-locking centre differential, while the A5 Sportback is front-wheel drive. 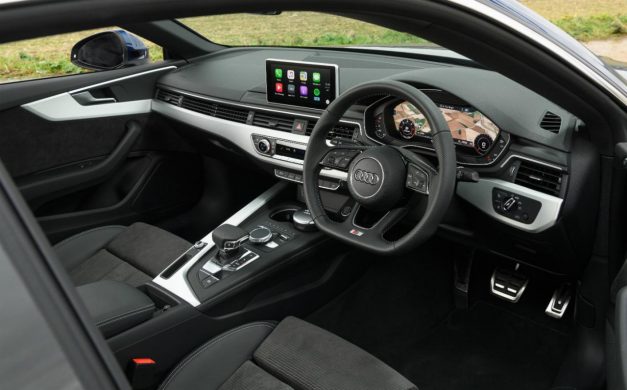